During 2015 and 2016 Shared Intelligence worked with The Mighty Creatives, who serve as Arts Council England’s ‘Bridge Organisation’ for the East Midlands.  Our task was to develop a set of collective outcomes for arts and cultural education within schools.  The project involved several of The Mighty Creatives’ regional partners and was inspired by the work of organisations in the US such as the Strive Together network and KnowledgeWorks who use the idea of ‘collective impact’ as a call to action, to use data as a tool for social change.

The project had two linked aims. One was to quantify the impact of arts and cultural education on children, especially children from disadvantaged backgrounds. The other was to create a stronger sense of collective purpose among regional partners and encourage closer joint-working.

We already know from reviews of academic research (such as the evidence review carried out by the Cultural Learning Alliance[1]) that children from disadvantaged backgrounds who take part in arts activities at school are almost three times more likely to get a degree than their peers who do not participate.

Based on this we can assume that if arts activities can engage school children from disadvantaged backgrounds, who do not usually take part in arts activities, then it is likely this will contribute to their future educational trajectory.

What we therefore needed was data to understand the extent that the regional partners working with The Mighty Creatives were reaching children from low socio-economic groups who were not (or their families were not) regular arts engagers.

Our approach was to focus on simple data which is easy and low-cost to collect. In addition to basic data on the number of children taking part, and the number of hours of activities we designed a simple data collection tool to enable arts organisations to gather data in an identical and fully comparable format.  It included:

This sounds simple to deliver, but one of the biggest challenges we faced was building agreement and consensus among arts agencies, schools, and community organisations to adopt common statistical measures – not just ‘similar’ or ‘comparable’ measures, but actually collecting the same metrics – requires depth of trust, and a maturity of relationships. What we found was that as the project progressed, the potential benefits to children, and to partner organisations became so apparent that they outweighed the doubts.

In the autumn of 2016 we worked with The Mighty Creatives to collect and analyse the first set of collective outcomes data.  The data covered 169 hours of activities in 16 schools which had involved 301 children.  What it showed was very unexpected.  Firstly, as the chart below shows, the children who had taken part in the arts activities were disproportionately more likely to come from disadvantaged backgrounds (using the proxies of free meals, Pupil Premium, and ESL).  Secondly, three-quarters of the children who took part had home postcodes in areas which are among the lowest arts-engagers in the country.  In other words the activities reached precisely the children who – according to the research – stand to benefit most from arts engagement. 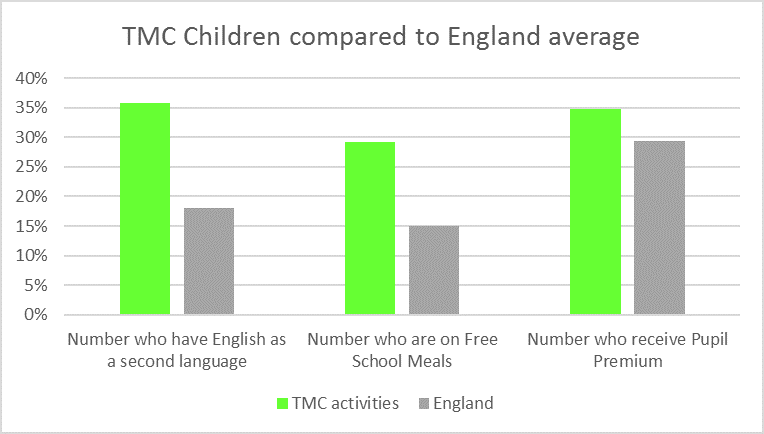 Our work with The Mighty Creatives now forms the basis of their collective outcomes tool which is being adopted by organisations involved in arts and cultural education across the East Midlands.  You can find out more about how this work is now being taken forward here.

Arts Culture and Libraries, Improvement and Support, Learning and Development